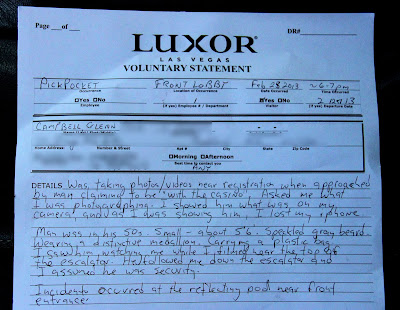 Last night I misplaced my iPhone on the Las Vegas Strip. It appeared I was targeted by a sophisticated pickpocket at the Luxor casino. The incident was a powerful lesson in human perception and how it can be easily lead astray. This story has many layers and a surprise ending. What I learned may be more valuable than the price of any iPhone. 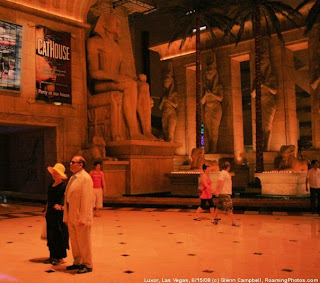 I was shooting video in the Luxor casino, in the Egyptian-themed entertainment areas away from the gambling floor, when I was approached by a man in tourist clothing who asked me what I was filming. I had already noticed him watching me and had already pegged him as plainclothes security, but I was annoyed by the intrusion. It was obvious that I was photographing the fake Egyptian statues at the front entrance of the casino that were deliberately placed there to be photographed.

I responding rudely. "Who are you?" Although I assumed he was security, there were no visible signs that he wasn't just a tourist. I wanted him to prove himself.

The man was slow and careful in his response. "My name is Scott."

"I'm just photographing this stupid tourist shit," I said. "You're in my space, Scott."

"I saw you at the top of the escalator and was wondering what you were photographing."

I accepted this claim because I had already seen him watching me, following me and acting security-like, even though there were no outward proof of it. (I had already checked for an earphone in his ear and didn't see one, but it could have meant those devices were just getting smaller.) I didn't get any less rude, however. As a photographer, I have developed a complex set of protocols when people don't want me to film. Sometimes, I back away gracefully and sometimes I'm an asshole. This situation, I felt, called for assholiness.

"That isn't necessary," he said.

"Do you want me to show you my photos?"

"That would be good," he said.

I recalled the last video I shot and played it for him on the back of my camera. It just showed me moving past some smaller Egyptian statues to focus on a bigger one. No people or gambling areas were visible in the video.

This seemed to satisfy him. I asked if he wanted to see the rest of my photos, but he said that wasn't necessary. He withdrew, and I continued with my filming.

What I didn't realize at the time is that, in that moment I was showing him the video, he was within my "personal space"—that is, in close proximity to my body in a zone when one doesn't normally allow others to approach. In theory, he was within reach of my back pants pocket where my iPhone was located. I felt nothing and recall no sensation of being touched, but after two hours of intense filming on the Las Vegas Strip, my iPhone was missing.

I do not normally keep my iPhone in my back pocket, where it is more vulnerable, and not using my iPhone in the space of two hours is almost unthinkable, but this was a photography expedition, and I was totally concentrated on my camera. My iPhone was in my back pocket because all my other pockets were filled with batteries and camera gear I do not normally carry. Thus, my senses were disoriented. The pressure in my front pocket that I normally associate with my iPhone was actually a camera battery.

I noticed my iPhone was missing only after I had returned to my rental car and driven away from the casino. When I first got back to the car in casino parking, I was exhausted and dumped all my batteries and equipment from my pockets onto the passenger seat. I assumed my iPhone was there, but when I got to my destination, I couldn't find it. It was night, but I searched the crevasses and seat cushions of this unfamiliar car as best I could. No luck.

In my frantic state (ISA = iPhone Separation Anxiety, a common modern affliction), I finally put two and two together. I had no specific memories of my iPhone since putting it in my pocket as I first left my parked car, and this "Scott" was the only person who came close enough to me to take it. During my film shoot I was constantly moving and never even sat down, so I felt the chances of anyone else stealing it or it falling spontaneously out of my pocket were slim.

A few weeks before, I had read an article in the New Yorker about a "theatrical pickpocket" who lifted people's personal items as a sort of magician. He would tell people he was going to pick their pockets, so they would presumably be on their guard, but he would still have no trouble lifting watches, pens and other personal items off of them without them noticing. He even did it to other magicians like Penn Jillette.

The slight-of-hand artist in the article perfectly fit the profile of "Scott"—quiet, self-effacing, polite but annoying. I now figured the whole "with the casino" bit was a ruse to get close enough me to lift whatever was in my back pocket. He couldn't know it was an iPhone, but he might have seen that it was accessible.

This guy was smooth! First, there was the problem of getting close enough to my body to take anything, but he was also operating in a Las Vegas casino, probably one of the most intensely monitored public spaces on Earth. The article, however, made me see that it was possible. I also knew from living in Las Vegas that most casino security is focused on the gaming areas where money is changing hands. Relatively little attention is given to the public areas where no casino assets are at risk.

I felt that my iPhone was lost forever. If "Scott" was a professional, he would have left the Luxor immediately and moved on to another casino where I had no chance of finding him. I checked my photos and videos, but he wasn't on them. (He must have been smart about that as well.) I ran through all the damage control I would have to do to protect my data, and I added up the cost of the forced upgrade to a new phone.

Do not weep for me about any lost equipment. As a perpetual traveler, theft and loss happens to me frequently. I have had numerous computers and cameras stolen. I narrowly avoided a pocket-picking on the Paris Metro (and got photos of my assailant). I even had my passport stolen in a foreign country (if you call Canada "foreign"). I had an earlier iPhone stolen on Miami Beach when I went for a predawn swim. Each incident taught me something and trained me to arrange my life so thefts are no big deal. Every physical object in my life is replaceable, apart from a few key internal organs.

I refer to electronic thefts as the Forced Upgrade Program. Whenever I lose a camera, computer, or phone, it is just an excuse to upgrade to the latest technology. Alternatively, it can sometimes be a good excuse to let go of technology for a while and get back to the basics. In any case, the loss of a cellphone is hardly news in my world, but this incident was different. This was a mind game! Virtually all of my previous thefts were crude crimes of opportunity by criminals I assumed were drug addicts. This was different. If this was real, it was a smooth crime by a sophisticated criminal.

My iPhone was gone. By process of elimination, "Scott" was the only person who could have stolen it. There was no chance of getting it back, I figured, but at least I could do my civic duty by reporting the crime. I drove back to the Luxor to at least tell their security about it. I knew they would take it seriously, and they do have plenty of video cameras in the place. I didn't think I would recover my own cellphone, but at least they would be on the lookout for this guy in the future.


I knew Luxor would be especially concerned because this guy was claiming to be "with the casino". At least I would get a clear answer to what happened to my baby. If the casino did not have an employee named Scott working plainclothes security at the time I was there, then it was obvious that the fake "Scott" was a professional pickpocket and took my iPhone.

Luxor security was very responsive. I want to the security desk and filled out a form (shown above). A security officer came out to talk to me. He asked intelligent questions and took notes. Then he said he wanted to talk to his supervisor, and he asked me to wait.

When he came back, he had some surprising news: The casino DID have a plainclothes officer named Scott matching my description working in my area at the time of the alleged incident. They were concerning about my filming and had been watching my activity on video.

The officer said he didn't know how much of my encounter with Scott was on video, but they could probably call it up if they needed to. Would I like them to do that?

I laughed. "No, that won't be necessary," I said. "This has been quite an education."

The officer said he could still take my written incident report if I wanted to give it.

I said that wouldn't be necessary. I would take it as a souvenir.

I returned to my car, realizing that the only con artist was me. This New Yorker article had sensitized me to pickpockets and had made me believe anything was possible, even in a well-monitored casino.

Sure enough, with daylight the next morning, I found my iPhone lodged in a narrow crevice of my rental car.
Posted by Glenn Campbell at 7:15 AM 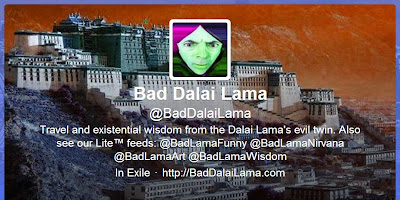 Below is a collection of 100 of my past tweets on marriage (tweeting as @BadDalaiLama). This list was assembled for the English language edition of my forthcoming book, The Case Against Marriage. If you would like to locate and retweet one of these tweets, you can find it by searching one of my two archives: the official downloaded Twitter archive or my own homemade tweet archive.
You can find many more related tweets be searching the archives (above) for "love", "marriage", "relationship" and similar terms.
Posted by Glenn Campbell at 2:37 PM