Taoism vs. the Western Way 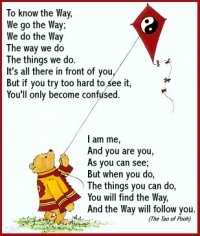 [This post is a modified version of a letter to a friend.]

There was once a girl I liked who gave me a book, The Tao of Pooh, I don't know if you've read it: Taoism explained in terms of Winnie the Pooh. Pooh is the most Taoist of all characters. He doesn't try to impose his will on the world; he just lets the world flow through him.


I loved the book! I wished I could write a nice simple book like that. But at the same time I recognized the flaws of Taoism, how it is really a corrupt philosophy if taken by itself.

Taoism taught me to take advantage of the winds as they are, not expecting them to blow where they're not. But if you take this philosophy to the extreme, you're just casting yourself adrift, subject to the storms and winds of the sea, and you'll get nowhere.

Taoism is poisonous when it encourages people not to take an active position in their own lives, which I think was the aim of the girl who gave me the book. The dark side of Taoism is passivity and fatalism. Taoism may account for the fact that the Chinese had gunpowder but never thought of guns, had sailing ships but never bothered to explore. Taoism = no initiative but to wake up in the morning and accept the world as it is.

In real life, people like Pooh get abused and eaten alive. Life doesn't give you a pleasant, protected Hundred-Acre Woods to live in. In real life, you have to take initiative just to protect yourself. If you just let life pass through you, you're going to be victimized. You're also going to be a mindless, boring twit with no curiosity or initiative.

The Western materialistic way is to impose your will on everything, which is equally corrupt. You barge ahead regardless of the winds. You cut all fish into uniform square bricks and sell them as Filet o' Fish sandwiches. The Western way is to try to force the world into a system that you design, which has all sorts of collateral damage. If you cut all your fish into square bricks, wiping out their individual quirks, you'll be wasting a lot of fish as well as depleting the local fisheries and exploiting the people involved in production. The Western way denies nature and wastes a lot of resources, but it had taken over the world because it is reproducible on a massive scale.

A middle ground is life aboard a sailing ship. In the age of sail, you had to listen to the winds and move with them. At the same time, people had places to go. They had goals to achieve, which Taoism really can't account for. Non-Taoist sailors actually went out and explored the world, whereas the Taoist would never leave port. Often the goals of the explorers were deluded -- searching for Eldorado -- but at least they were motivated by SOMETHING.

My own modified Western-Taoist position is that I'll listen to the winds, but I'm also driven to get someplace. I don't have specific goals, like Eldorado, I have "meta goals" -- certain creative directions I want to go in when given the opportunity. It is the difference between drifting aimlessly in the Caribbean and choosing to at least go East or West.

Taoism is popular these days because it helps justify people's passivity -- not taking action in one's own life. Passivity is often a result of being overprogrammed and deluged with stimuli, so you just don't have time for thoughtful decision making. The average TV viewer is very passive and Taoist. He just lets the TV schedule flow through him and is never motivated to leave his couch.

The Taoist is poor at thinking ahead. He isn't trying proactively to head of crises before they happen. Because he is living in the "now", he is not a very good chess player, where you have to think many moves ahead. Because of this, the Taoist is often abused and exploited, like Pooh would be in the real world or how millions of Chinese now are in the slave labor camps of the Walmart corporation.

I've never been a passive type, but the crises of my adulthood really turned me into the master of my own ship. I'm not going to deny the winds, but I sure as hell am going to take the rudder! Even when I chose NOT do something, I don't do it passively. It means I have thought through the implications and have made a conscious decision that doing nothing is my best alternative in this instance.

Life is a series of forks in the road. At each of them you make a decision. You listen to what nature wants, but it is still your responsibility to actively decide your path, using all the resources at your disposal to try to foretell the future. Sometimes you choose wisely, and sometimes poorly, but you always learn something from it to apply to the next decision.

You can't just "go with the flow" as a Taoist would. You must actively decide what stream to follow then actively steer your ship upon it.
Posted by Glenn Campbell at 6:27 AM