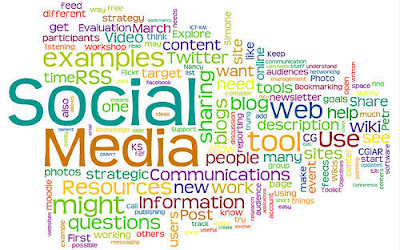 Below is a road map of how all my various social media accounts fit together. (See our website for a more recent statement of these policies.)

Facebook is my photo diary, the place I upload all my photos as I take them and where I record most of my other work as it is released (videos, blog entries, etc.). It is also my place to communicate with actual non-virtual friends. Most of my Facebook page is public and anyone can subscribe, but I friend only people I know or who I have an obvious connection with. (You can always try to friend me, but I'll run you through some filters before I accept.)

Facebook is linked to everyone I know—family, friends, casual acquaintances—so my postings there are designed not to offend. It is an ideal forum for pretty pictures, links to travel videos and other things that are unlikely to upset anyone's apple cart.

My photos on Facebook are usually edited, and they may be posted hours or days after they are taken. I have HUNDREDS of photo albums on FB from all over the world, indexed on my photo page.

I use Twitter when I want to speak my mind, without worrying much about discretion. Although I don't try to keep my Twitter account secret, very few of my Facebook friends follow me on Twitter. Twitter is simply too much work and takes too much initiative for most, so there is a de facto firewall between the two (at least in one direction). This allows me to be more spontaneous and truthful, making uncomfortable observations without fear of offending my conventional friends and acquaintances.

Here are my Best Tweets of All Time as judged by my followers, and here is what they like right now.

Twitter plays a special role in my social media strategy because it is not just a real-time feed. My tweets are permanently archived in a system of my own creation: BadDalaiLama.com. This provides a sort of personal diary of where I went, what I did, what I was reading, what I was thinking and what I stumbled upon in life—as much for my own record as anyone else's. (I am frequently looking back at the archive to find old links and where I was on a particular date.)

Twitter is also my main forum for words of wisdom. I spew aphorisms like you wouldn't believe! (The timeless ones are reposted on @BadLamaWisdom.) Whenever I tweet something, I want it to have permanent relevance, fifty years from now as much as today, so I try not to clutter my timeline with many here-and-now tweets or too much conversation with others. (I generally prefer DM's for personal exchanges.)

My photos on Twitter are usually posted "as they happen", directly from my iPhone without editing. However, I may also post some of my best edited photos after I have uploaded them to FB.

I tweet many times a day! Hardly a waking hour goes by when I don't spew something. For my full Twitter policies, see BadDalaiLama.com

My Google+ is is not nearly as active Facebook and Twitter. I use it to repost important things that might be lost on my other dense feeds. My rule for G+ is "only the best!". I used to post a lot more photos there until I upgraded to Timeline on Facebook. Now I might post once a day at most, and only my very best stuff.

Only about half of my YouTube videos are "public" and directly shown on my YouTube page. The rest are "unlisted" and can be viewed only if you have the link. These video usually are not secret; I just don't want them to clutter up my YouTube channel and distract from my better work. My video page is intended to index ALL of my videos, including the unlisted ones. I will also announce most of my videos on Facebook and Twitter as they are uploaded. My travel videos are also cross-referenced on my photo page by location (currently incomplete).


Yup, I still use it! I have a dozen valid addresses, but most of them channel into BadDalaiLama (at) gmail.com, which is the fastest way to reach me.

I use FourSquare only as an easy way to update both Twitter and Facebook with my location. Unlike some 4SQ users, I'm not going to tell you everywhere I go. I'll only report interesting locations or places I have something to say about. Most of my 4SQ posts appear on Twitter and Facebook, so there isn't much need to follow me on 4SQ.

I am on LinkedIn, but I am not an active user. (Since I have no marketable skills, LinkedIn isn't much use to me.)

In 2010, I maintained a Tumblr Blog of my best videos, but that has been replaced by Google+. You can still browse it for some nice photos from that era.

I have experimented with many other forums, including TwitPic, TwitVid and Facebook Video. Ultimately, I gave them up, but they still have some interesting archive material.

My first Twitter account was @KilroyCafe. This was my 18 months of training before @BadDalaiLama. A lot of great forgotten tweets, with a home-built archive system to access them.

Kilroy Cafe is my main forum for philosophical essays, songs and other verbal work. If my message is too long to fit into a tweet, I'll probably post it here. Active since 2008!

Homeless by Choice is my forum for extreme budget travel, although I rarely update it anymore.

Area 51 Loose Ends is where I post random things about the secret Groom Lake military base in Nevada. I am no longer an active researcher in this field, there may still be a story or two I want to publish.

Things You Don't Need has been inactive since 2009, but I reserve the right to post there in the future.

Posted by Glenn Campbell at 3:50 AM