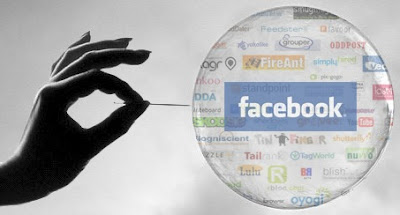 I don't usually comment on current affairs, but the impending Facebook IPO is irresistible. I've got to predict doom and gloom while I still have the chance. Don't get me wrong: I love Facebook and use it every day. I don't expect the website itself to collapsed, but the numbers being thrown around for the company's value just don't make sense.

Supposedly, the company will be valued at somewhere between $75 and $100 BILLION when the IPO happens, which would make it one of the world's biggest companies, even though it has a vague and completely unproven profit model.

Let me do a crude financial analysis here. Facebook claims to have 800 million active users, so that means investors are essentially paying $100 for each of those users. How can the company possibly squeeze that much value out of all of its users or even a majority of them?

Those 800 million users include just about everyone in the world with a computer. They are rich and poor, but mostly poor. The vast majority are no better than casual users, logging in once a week or less. And when they do log on, they don't look at advertizing. They are concerned with their photos and comments, and they are not in the mood to buy things. Facebook has one of the WORST click-through rates of major websites. People just aren't interested in buying stuff while they are there. (In contrast, when people do Google searches, they are much more motivated to buy.)

You could argue that the user base is bound to increase, and 800 million is only the beginning, but how far can it go? Keep in mind, there are only 7 billion on the planet, 1 billon of whom live in China where Facebook is blocked. As Facebook pushes a billion users, you got to wonder whether the remaining 5 billion even have computers. At some point, the numbers have to plateau, as people dropping out of active use match those just signing up. In other words, any real growth beyond a billion seems highly unlikely.

And no one yet has evaluated the quality of those users -- that is how many truly active users there are. That will start happening as soon as the company goes public.

According to standard valuations, a company is usually worth about 10 times earnings. So if Facebook is valued at $100 per user, it has to make a profit of $10 per user per year to be considered a break-even investment. No way can this happen!

To generate $10 in profit, Facebook has to generate a lot more revenue because there are also expenses to pay, mainly the huge cost of server farms. Facebook is essentially providing each user with unlimited photo storage forever, and this costs money. (See previous blog entry.) Storage and bandwidth costs are a non-negotiable expense. The price of these things is always coming down as technology advances, but probably not as fast as people are uploading photos. So Facebook's expense are going to continuously grow over the years. To make a $10 profit, Facebook may have to sell $20 worth of advertizing to EVERY user, so it can pay its server expenses, and it may have to earn more and more every year just to keep pace with storage growth.

True, Facebook has unprecedented access to people's habits and activities, which is highly valuable to advertisers, but this value is not unlimited. At a certain point, advertiser will say, "So what? They're not buying things, so why do I need this information?"

I don't know about others, but I have used Facebook intensely for over three years, yet have clicked on ads only a couple of times, and I have NEVER bought anything through those ads. Who would pay for clicks like mine?

I fully expect the coming IPO to be a big success! That's because a lot a naive investors with poor math skills are eager to climb on board. It's just like every past Gold Rush. People hear from their friends that this is a great investment, and they don't want to miss the boat. They use Facebook every day, think it is great and want to be part of the action, but they have no skill in valuing stocks.

These dumb investors may keep the bubble inflated for a little while, but what ultimately determines stock price is profit, and in Facebook's case, the profit is trivial and may always be trivial, at least nowhere near the profit that the current valuation suggests.

I don't expect the Facebook website to cease operation. It is still a valuable asset, just nowhere near its valuation. A lot of investors are going to be badly burned when the stock price finally reaches a rational level. At this point, I wouldn't be surprised if Zuckerberg is forced out and replaced with more conventional profit-driven management.

In the future, expect more intrusive ads and the introduction of fees for things that were previously free. There is no way around it. If you want an expensive service like this, you have to pay for it, and personally I would be happy to do so.

I depend on Facebook, and I hope it survives the crisis ahead.
Posted by Glenn Campbell at 8:21 PM