Eastern Europe: Your Next Vacation! 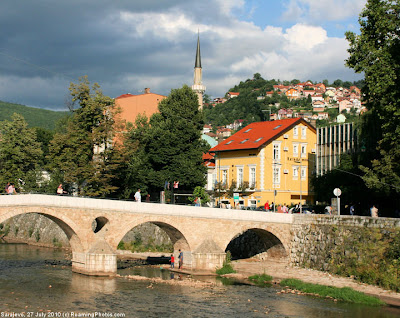 If you are planning a vacation for next summer, let me put in a plug for Eastern Europe. It is cheap, safe, easy, and you don't need any visas. Poland, Hungary, Slovenia, Slovakia, Bosnia... there are too many countries to mention, many of which you probably know nothing about. I define Eastern Europe as all those countries that used to be Communist, and there's a lot more of them now than there used to be then.

Eastern Europe is not the dark dismal place of the Communist era, nor the ethnic battleground of the 1990s. These are optimistic, green and generally prosperous countries, very welcoming to tourists. The tourist trails are not so well-worn as in Western Europe, and there's more opportunities to get lost, but that's part of the adventure.
Above all, it's a safe adventure! Crime seems no worse here than in Western Europe or North America. And did I say cheap? Last summer, I wandered around in a half-dozen countries for only about $25/day for food and lodging. Then it was $25 to $35 more each time I took the train to the next city. Airfare notwithstanding, that's a lot cheaper than any vacation in the USA!

You don't need to know a single word of the local language (of which there are many). English is sufficient for communicating with ticket agents and lodging staff. (English is, after all, the language of Rock n' Roll, which the whole world speaks!) If you are lost, the first person you talk to may not speak English, but there is almost always someone in the vicinity who does—it's not as English-friendly as Germany but roughly equivalent to France.

You don't even need an itinerary! Just choose a city you can fly to cheaply, reserve your first night's stay, and the rest of your itinerary will take care of itself. Bring a laptop, plug into the wifi at your lodging, and plot your next move.

If you actually plan to go, the following is more detailed advice....

Start at HostelWorld.com, to see the accommodations available. You can book hostel beds here, but this is also a good place to find private rooms. Throughout most of Eastern Europe, a hostel bed for $15 is common, as is a private room for $40. Even if you walk out of the train station and stop at the first hotel you pass, you'll probably find a very reasonable rate by US standards. If you're the sort of wuss who needs to stay at the Hilton or equivalent sanitary lodging facility, I'm sure you can find that, too, but you're on your own here. One huge advantage of hostels, apart from the low price, is that you meet lots of people, which might never happen in the Hilton.

June and July are glorious! So is September. Avoid August, though, because all of Europe is on vacation then; trains may be packed and lodging booked.

If you are an American, Canadian or European, you don't need any visas for the Eastern European countries. (Check the US State Dept.'s travel site to be sure.) Only Russia requires a visa, and the hoops you have to jump through there seem almost as complicated as they were in the Communist era. For the other countries, just go as you wish. Ukraine? No problem!

Train is generally the way to get around. You can usually look up the schedules and fares online, then just go to the station on the day of your travel to buy your ticket. My all-day train ride from Zagreb to Sarajevo was only $25, and other point-to-point fares aren't much more. There is really no need for a rail pass with prices this low! (In Western Europe, plan to spend 2-4 times as much for an equivalent trip.) Eastern European trains tend to be old and a frayed at the edges, and stations can be dismal, but the whole system works and gets you there for a reasonable price.
You could also rent a car. In a car, unlike a train, you can start and stop at interesting places along the way. However, a car doesn't make much sense on your first visit to a new country. In that case, you want to cover as much ground as possible without the stress of driving. On your first visit, your main focus is the old town centers, where you get around on foot anyway and parking is a bitch.

One really cool thing about many of the trains in Eastern Europe: You can usually open the window and poke your head outside. That's way more exciting than a sanitary ride on the TGV, where you can't even sense how fast you're going!

One annoyance is money. Some countries use the Euro, but most still have their own unique currencies, which means you need new money at each new country you visit. The easiest way to obtain the local currency is to use your ATM card at a cash machine. Beware, however, that your bank may note the unusual activity and cut you off from your funds (believing it is fraud). You can avoid this by informing your bank of your travel before you go. (Call Customer Service to tell them.) Even then, you should be prepared for the possibility that your ATM card could be cut off.

If you go to a tiny country like Bosnia, you have to plan your transactions carefully, so you have enough cash for your visit but not too much. (Just like the old days in Europe before the Euro!) Acceptance of Visa/Mastercard is not universal, even for train tickets, so you can't depend on it.

Power is the European 220 volt standard, using the same plugs as the rest of continental Europe. Most modern electronics (like your laptop and camera power adapters) run on both 110 and 220 volts. (Look at the print on the adapter.) All you need is a small plug adapter (converting flat American prongs to round European ones), NOT a voltage converter. Adapters can be hard to find, so you need to have one before you leave home. (Walmart usually has a universal adapter in their luggage section.) Don't forget an extension cord or branching cube so you can charge all your devices at once.
Wifi is standard the world over. You need to make sure your lodging has it before you make your reservation; if not, don't go there.

Do not use your cellphone in any manner outside of your home country, unless it works on Wifi. The charges are astronomical, even for the simplest text message! Lots of visitors Skype on the Wifi at their lodging (much to the annoyance of their roommates).

So you have your first hostel night booked in the city where your plane lands. You plug into wifi and plot your next move. At the hostel, you will also meet your fellow travelers and you can ask their advice. This is especially important in Eastern Europe where there may not be a lot of information online. (For example, look at Bosnia on Google maps, and you'll see a big blank area.)

I don't need to give you specific advice on where to go, because you can figure that out on your own. I enjoyed the places I visited—Ljubljana, Zagreb, Sarajevo, Belgrade, Transylvania and Budapest—but there's much more I haven't seen. In particular, you shouldn't be afraid of the Balkans. The wars of the 1990s are long past, and these are stable countries now. Romania, also, is not the horror show it once was. I travel here with the same comfort as visiting the Netherlands.

On the other hand.... Myrtle Beach, South Carolina is a perfectly lovely vacation spot. So is Pigeon Forge, Tennessee. Where else in the world can you find a higher density of miniature golf courses? Disneyland, Las Vegas, Six Flags... I know a many Eastern Europeans who would die to visit these places.

However, I expect a little more from you.
Also see my blog entry: How to Sleep in a Hostel
Posted by Glenn Campbell at 12:27 PM