The Limits of Selfishness 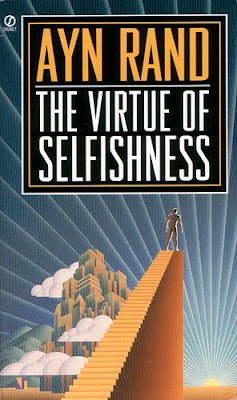 A long time ago, a chain smoker named Ayn Rand wrote a book called The Virtue of Selfishness, which has been a favorite of college sophomores ever since. Her contention is that altruism is a sham. Even those who claim to care about others are just in it for themselves (reward in heaven, etc.), so you might as well give up the charade and just go for shameless self-interest from the start.

Sadly, Ayn is dead now, succombed to smoking-related heart failure. I harp on smoking because if she was so self-interested why couldn't she quit? The achilles heal of selfishness is that it doesn't really give your life meaning or motivate you to move one step beyond your hedonistic desires. If you know an Ayn Rand fan, they are usually isolated and emotionally restricted people, with a bent toward the paranoid, who don't seem to be taking much pleasure in their selfishness.

Say you accept selfishness; then what do you do? You can make a lot of money—Ayn's all for that!—but then what are you supposed to do with the money you've made? Is it really satisfying to buy another boat or mansion, and how many times can you visit Antarctica? You could give your money to charity, but—Oh no!—that would be altruism rearing it's ugly head.

Altruism may be an illusion or selfishly motivated, but there just isn't any other worthwhile objective in life. You will live and die on this planet, so you might as well do what you can to improve it. It may be selfish to think this way but you want people to say after you're gone, "He made this world a better place." It seems so much better than, "He screwed people over," or "He didn't make a difference at all." Your motivations may be less than pure—You want others to appreciate you, care about you and remember you after you're gone.—but even an illusion of altruism feels better than none at all.

It turns out that a lot of our self-interest is tied up in other people. To relate to others, we have to give them something they want, so we have to start thinking about other people's needs apart from our own. The Randian merchant—represented by Frito Lay and Coca-Cola—is going conduct marketing research and give the people exactly what they want, sufficient only to make them turn over their money. A more altruistic merchant is going to give people more of what they actually need, even if it is less profitable. Selling quality rather than crap is just more satisfying to the seller. It lets him sleep better at night than the Randian merchant.

Selfishness, processed through intelligence and foresight, begins to look a lot like altruism. If you care about other people, then they will care about you and often give back things that serve your needs. Ayn Rand may teach you how to make money, but if you want more subtle rewards like love and personal satisfaction, you have to start negotiating with others. You have to at least pretend to care, and after you pretend for long enough, you actually will care. In spite of your selfishness, it will matter to you what happens to others.

The main problem with altruism—wanting to help mankind—is how to go about it. There is very shallow altruism where you simply take every resource you have and give it to someone else. If other people are hungry, then you feed them, up to the point where you can no longer feed yourself. The trouble with this simple form of caring is that it doesn't work. It doesn't really improve the planet. Feeding people doesn't improve their self-sufficiency or address the underlying problems that made them hungry. Airlifting food and dumping it on hungry people has certain value in crisis situations, but in the long run it doesn't help them. For one thing, they're probably going to procreate and produce even more hungry people.

To really be effective in the world, you have to be clever and strategic, outwitting the many forces that work against altruism. That's where selfishness comes in. Before you can realistically help others, you have to help yourself. You have to build up your own resources, knowledge and skills. The smarter you are, the better equipped you are to help others. If you are significantly advanced and socially connected, then you're not just going to feed the starving people of Africa; you're going to marshall the diplomatic forces to stop the civil war that makes them hungry. That's a complicated task, and to address it you've got to become a complicated person. You have to make a huge investment in yourself before you get to the point where you can solve those higher-level problems.

So selfishness is good, at least in the sense that it's good to invest in your own skills and resources. Your body and mind are the tool by which you help others. For maximum effectiveness, you have to refine and maintain this tool, and this can involve a huge investment. Instead of spending 100% of your time and resources on others, you might spend 90% on building up yourself, on the assumption that the remaining 10% given to others is going to be more effective. One strategic diplomatic move—or one well-placed missile—can sometimes do more than billions of dollars in direct food aid. Deciding where that move should be made requires a long-term investment in your own education and social positioning.

Altruism isn't just feeding one hungry person but all of them. If a beggar comes up to you on the street and asks for money, the simple-minded altruist is going to give it to him. The smarter, more self-conscious altruist is going to say, "Wait, is this really the best use of my money?" Maybe the best use is to retain your funds, guard them for yourself, and invest them in your own education and skills.

Altruism may be an illusion, but so is selfishness. The best route is in the middle, using your selfishness to pursue higher altruistic goals. By this philosophy, you can quit smoking! If you care about others, then you'll have the motivation to change yourself.

Sad thing about poor Ayn: She just didn't have anything to live for in the end.
Posted by Glenn Campbell at 8:30 AM