Reflections on the Real Estate Bubble 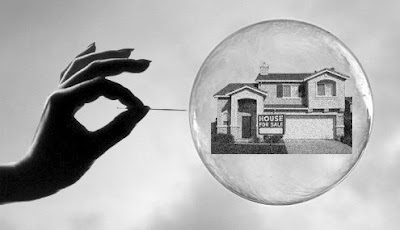 Back when I was a programmer in Cambridge in the late 1980s, a colleague from India bought a tiny apartment condo in town for the seemingly atrocious price of $100,000. I remember him telling me (shaking his head in the negative as Indians often do): "Real Estate is the only investment that always appreciates. It NEVER depreciates."

I thought to myself, this can't possibly be true. It simply defies the laws of physics. Sure enough, there was a downturn in the Boston housing market the following year, and the value of his condo did depreciate. There was also the collapse of a massive real estate bubble in Japan at about the same time. These events forever educated me on the fragility of real estate.

I mean, who needs it, really? Real estate is a burden as much as an asset. Once upon a time, you needed some form of real estate just to have a phone and later to plug in your computer, but now real estate is mainly a vanity item, a place to build a shrine to yourself. Everyone needs a safe place to sleep at night, a place to relax and a place to work, but when push comes to shove, this can be a very small area that changes with the winds.

When I was married in the late 90s, we bought a big two-story house in Las Vegas, with a swimming pool, for the very reasonable price of $130,000. We totally trashed the place but still sold it for more than twice that amount seven years later (one ray of good luck in the holocaust I was going through at the time). The buyer payed cash, planning to clean the property up and "flip" it. I knew he was paying too much, but I didn't object.

Whew! I happened to sell at the peak of the market and now have no real estate to suck me under. I own next to nothing now—mainly my camera and laptop computer—but at least I don't have any liabilities.

Having got out by skin of my teeth, I became a voice of doom in Las Vegas. Nobody listened, but that didn't stop me from preaching. I saw a classic bubble all around me and wrote about it in one of my newsletters: REPENT NOW--THE CRASH IS NEAR. I regret only that I didn't see the bigger picture: that the whole world's real estate was overvalued, not just Las Vegas'.

The same thing happens again and again throughout history (and in people's private lives). They get caught up in good times, see only the "trend"—which is upward—and start making plans and commitments based on that trend going on forever. You have to have some experience and worldliness before you realize that a "trend" is really just a cycle, and the direction is bound to change. If I had not had my experiences in Boston, I too might have believed that real estate "always appreciates, never appreciates."

The ultimate fallout of the current crisis will probably be that real estate is permanently devalued. Prices may never recover. People are living virtual lives now, so why do they need "real" estate? Why build a shrine to yourself on the ground when you can do it online for a fraction of the cost.

You need a place to "live," but you don't need the castle. Your online friends aren't going to know or care. There will always be people willing to invest in real estate and tie themselves down, but it will never again be the trendy "in" thing to do. Upwardly mobile means locationally mobile, without the heavy anchors.

Now the "trend" appears to be downward, and people are beginning to behave as such, thus accellerating the trend, but this too is a cycle, and the direction will change. The world will adjust. Real estate will someday return to stability but will never regain its delusional glory.

You can't really "own" real estate. It owns you. You can build your shrine, but then as your life winds down you're going to have to deconstruct it—either that or your heirs are going to dispose of it for you. The ornate physical plant now seems such a waste. It's what you accomplish that matters, not where you sleep. —G.C. 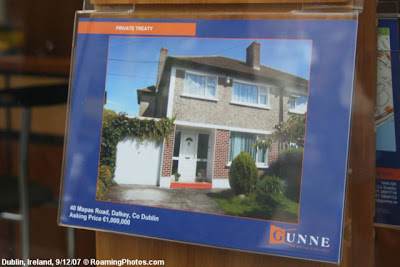 The real estate prices in Dublin in Sept. 2007 struck me as insane at the time: €1,000,000 for HALF a house. (That was $1.4 million at exchange rates at the time.) In this shop window in the suburb of Dun Laoghaire, the lowest price for the smallest condo apartment was €365k. Local salaries couldn't possibly support these prices.
Posted by Glenn Campbell at 10:48 AM