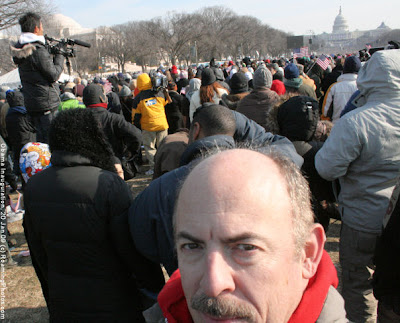 On Tuesday, my assault on the Obama Inauguration went without a hitch. I arrived at Reagan Airport on an early morning flight, hit the Mall for the swearing in, then escaped before the crowds did. In all, I spent only about 6 hours in Washington. It was a precision strike: parachute in, achieve the objective (photographing the event) and airlift out.

As a furloughed airline employee, I get to fly for free, but I fly only when empty seats are available and no active employees want them. Given that a million people or more were descending on the capital, an empty seat might seem impossible. My advantage, however, was that I had access to the flight loads and could choose the cities I came and went from. (In even the busiest travel period, there are always some flights with seats.) With careful planning and some luck, I managed to pull it off. I took an odd routing out of Las Vegas, spent the night in the airport in Charlotte and arrived at Reagan National Airport at about 9am.

The subway from Reagan to the Mall started out merely crowded but turned into a Tokyo-style sardine can. The mood was jovial, though. This had the feeling of a great celebration, like New Years Eve. It seemed almost a like a shared religious experience. Everyone in the crowd, both in the subway and on the Mall, seemed united by two things: their hatred for Bush and their faith in Obama.

As we were packed tighter and tighter together on the Metro, there was a lot of joking among the passengers, mostly about the ineptitude of the departing President. Someone said, "I mean, who voted for Bush anyway?"

I replied, "No one on this train!"

My subway journey was fairly complex, because several stations were closed and I wanted to be positioned on the Mall, not trapped north of the parade route. The trip from Reagan took only about 45 minutes with two transfers but was quite an amusement park ride! The cost was $1.75 but was worth much more than that!

I found the crowds I expected on the Mall—probably the greatest mass of humanity I will ever experience in my life! When you start mingling, however, you don't see the millions but quickly focus in on one neighborhood. My own neighborhood turned out to be the center of the Mall near the Smithsonian "castle" (see aerial photo below). I tried to wander further but encountered police barricades, so that's where I stayed.

This area happened to be the epicenter of television coverage, with dozens of satellite trucks nearby. The TV media had their own press stand where several dozen crews were shooting. TV crews were also roaming the crowds, which was good for my photography since the presence of TV cameras usually livens people up.

The crowds were clustered around "Jumbotrons" distributed around the Mall—giant television screens. In front of the screens, people were packed tightly, but away from them the crowds were much thinner and I could move around unimpeded.

Although we could see the Capitol building in the distance, it was of course impossible to see anything going on there. Instead, people focused on the giant screens. What was shown on the Jumbotron probably wasn't much different than what you saw at home. It was funny that most of these people had traveled hundreds of miles only to stand in the cold together and watch television, but I guess that's not really the point. This was an emotional, social and religious experience, not a practical one.

The millions here and the billions watching from afar were ostensibly focused on one moment: the swearing-in of the new President. I found it amusing, then, that the oath got messed up. I laughed when it happened, but I didn't see anyone else laughing. It reminded me that the center of all this adoration is a human being, capable of failure.

However, I couldn't help but be infused with the optimism of the moment. This is what needs to happen during a crisis: people need to draw together and start focusing on one thing, even if it's a figurehead. The nearest analogy I can come up with is the way the country pulled together after Pearl Harbor. The adoration of Obama was almost a Jesus thing, but sometimes you need a Jesus. Personally, I have put my own natural cynicism on hold. Obama seems more authentic and less self-serving than other politicians, and I am willing to have faith, for now, that he is the right leader for the times.

After the swearing in around noon, I got the idea that this would be a good time to escape. Unfortunately, so did half the crowd. As soon as I saw them moving in the same direction I was, I realized that getting back on the Metro would be nearly impossible.

I chose instead to walk back to the airport. This turned out to be quite easy. I just walked across the Potomac on an empty expressway. It was about four miles, and I easily made my escape flight to Boston at 3:30. It was only half full! (Had I waited a couple of hours longer or tried to take the subway, escape would have been impossible.)

Was it worthwhile? For me, definitely! My mission was to take pictures, so I had something to focus on. I kept moving, so I wasn't cold. The total cost of the mission was $5.50, including a return subway ticket I didn't use and a Dunkin Donuts muffin at the airport. 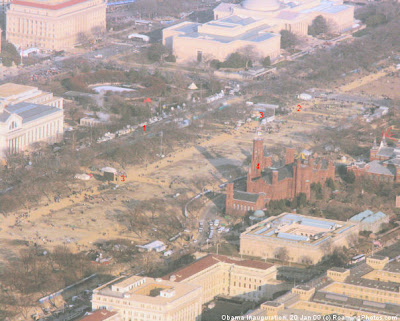