Screen Story #28: "The Problem with Paradise" 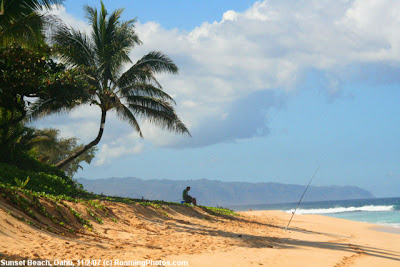 In my latest screen story, an office worker imagines a tropical paradise, then goes there, but he doesn't find the bliss he expected. The complete story is below. --GC

The Problem with Paradise
NOTE: This short film is entirely without dialogue.

We find ourselves in a "cubicle farm"—a cavernous office space of partitioned office cubicles. From above, they look like a massive rat maze leading off into the distance.

In one cubicle, labeled "JONES," a young man in a shirt and tie is goofing off. He is sitting at his desk throwing wads of paper into his wastebasket on the other side of the cubicle. His shots are accurate every time, indicating he has had a lot of practice.

Jones is facing his computer screen but seems reluctant to work. He is bored silly. He fiddles with the pen in his hands and looks up at two items of personal interest tacked to the partition in front of him. One is a photo of his girlfriend TRACY, and the other is a calendar showing an idyllic tropical scene.

The calendar shows a photo of a perfect beach on a perfect tropical island. The water is perfect blue and the sand is perfect coral white. There is a perfect palm tree leaning out over the calm water, and below the palm tree is a wooden lounge chair with no one sitting in it.

As Jones dwells on the photo, we hear the sound of waves gently lapping on the shore and seabirds softly calling.

Jones' reverie is broken by a supervisor walking by just outside the cubicle. Jones quickly snaps to attention and pretends to be working on his computer. The supervisor eyes Jones suspiciously but says nothing. The supervisor departs, and Jones relaxes again. He looks again at his calendar.

Below the photo on the calendar is the month of January. At the end of the month, two weeks are blocked off, saying "VACATION." At the beginning of the month, two days are crossed off, January 1 and 2. Jones is obviously looking forward to his vacation, but it's still a long time away.

In a montage, we see Jones go through day after boring day in his cubicle, crossing off one number on the calendar every evening. The supervisor again walks by, eying Jones suspiciously. Finally, Jones crosses off the last day of work before his vacation. He is ecstatic! He grabs his winter jacket, takes one last look at the calendar photo, then rushes away.

We remain behind, still looking at the calendar photo. We hear the sound of waves gently lapping against the shore and seabirds softly calling.

Then Jones himself appears in the photo! His head pops up first, looking directly at us, then he walks fully into the frame. He is finally there--inside the calendar photo!

The camera tracks into the calendar picture, and now we are there, too!

Jones is awed by the experience, and it takes him a while to get used to it. He is now in the tropical paradise he has dreamed of for so long! He is carrying a bag, which he sets down in the sand. Then he examines the wooden lounge chair and slowly sits down in it.

He begins to fidget in his lounge chair. So what should he do in paradise once he is there? Apparently, he hasn't thought about that.

He reaches for his bag and opens it. He pulls out a cellophane-wrapped calendar entitled, "Tropical Paradise." It is apparently a new copy of the same calendar he has on his wall. He takes off the cellophane and opens the calendar to January. Indeed, it is the very same scene we saw before, showing the same tropical view Jones is now part of. The only difference is there is no writing in the month section.

Jones takes a thumb tack out of his bag and tacks the calendar to the palm tree beside him. He marvels again at how the scene in the calendar exactly matches the place where he is now.

Jones takes a felt-tipped pen out of the bag and writes on the calendar. On the date just after the last one he crossed out at the office, he writes "I FINALLY ARRIVE!" On another date a week later, he writes, "TRACY ARRIVES!"

Jones sits back down in the lounge chair and starts to fidget again. He looks at the beach around him but eventually becomes fixated on the calendar. We begin to understand what his problem is: He has arrived a week before his girlfriend and has nothing to do in the meantime.

We pull back and can now see more of his paradise. Jones is a truly isolated figure on a big and lonely beach. Behind him in the dunes is the simple bungalow where he is staying. There are no other buildings visible—indeed no other sign of human life.

A seagull walks by Jones in the sand, looking at him disapprovingly. He resembles the supervisor who walked by Jones in his cubicle. Jones looks uncomfortable and throws a rock at the seagull, who flies away.

In a montage, we see Jones trying his best to kill time while waiting for his girlfriend to arrive. He collects shells on the beach. He bathes naked in the waves. He tacks his snapshot of Tracy to the calendar, and he crosses days of the calendar every evening.

In a scene resembling a beer commercial, his hand is seen reaching for a clear glass beer bottle standing in the sand with a slice of lime stuck in the top. The hand then returns the bottle to the same place, empty. Then another empty bottle is placed there—and another and another, until there are a whole pile of empty glass beer bottles lying in the sand.

By the end of the first week, Jones is looking like a sunburned, weather-beaten, frustrated castaway, desperate to get off of this hellhole island. He is sitting in his lounge chair throwing seashells at a bucket a few feet away—just like he did with wads of paper in his cubicle. His perfect aim indicates he has had a lot of practice.

Then Tracy arrives! We see her walking down the beach in the distance, wearing winter clothes and carrying two heavy suitcases. Jones races out to meet her!

In the distance, we see them embrace and kiss. As corny love music rises, they roll in the waves in each others' arms, swept away by their passion for one another.

Hand in hand, they walk toward the bungalow. They go inside and the door closes behind them, while we remain outside. A wooden heart shape on the door makes it clear what is happening inside.

The next morning, Jones alone emerges from the bungalow. He is looking refreshed but still a bit frazzled. He goes to the calendar and crosses off the date showing Tracy's arrival. He pulls another wooden lounge chair from the front of the bungalow to underneath the palm tree beside his own chair. He sits down in his chair and waits.

Tracy emerges from the bungalow wearing a bikini and carrying a beach bag. They glance at each other lovingly. Tracy goes to the chair beside Jones' and starts unpacking her towels, brushes and cosmetics.

She then starts a primping routine. She covers herself with suntan lotion and paints her toenails, as Jones looks increasingly bored. Eventually, she puts a mask over her eyes and starts tanning, shutting out Jones completely.

He looks over at the calendar tacked to the palm tree. Six more days to go! He sinks down in his lounge chair with a sigh, like a prisoner who has given up hope. Grimly, he stands up, goes to the calendar, crosses off another day, then returns to his chair.

Now, we pull back and see the scene as it was in the calendar, except there are two lounge chairs under the palm tree now, with an unidentifiable man and woman sitting in them. The sound of surf and seabirds is heard. The camera tracks back to reveal we are in the office cubicle again, looking at the slightly-different calendar.

Jones walks into the office now, to the scattered applause of his office mates. He is well-tanned and full of good cheer. He is thrilled to be home! He waves warmly to his supervisor, who still looks suspicious and doesn't wave back. He settles into his cubicle and seems to see it in a whole new light—a positive one!

He looks up at the calendar of the tropical scene. Thoughtfully, he reaches up and takes it down. Then he pulls another cellophane-wrapped calendar out of his bag and removes the wrapping.

This calendar is entitled "FANTASY OFFICE SPACE." Jones opens the calendar to February, which happens to show a cubicle farm almost identical to his own. He tacks the calendar to his wall where the tropical one used to be. Then he takes down the photo of his girlfriend and puts it in his drawer.

He stares at the calendar for a while, the one showing the office space. As he does, we hear the sound of waves gently lapping at the shore and seabirds softly calling.

Jones shakes off his reverie and resumes his work on his computer.

Also see my other screen stories at Love, Strangely.
Posted by Glenn Campbell at 9:09 AM