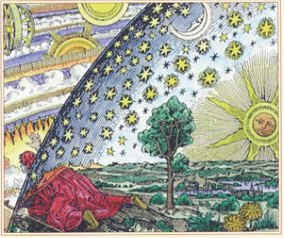 When thinking about what makes a good short film, I always come back to the same general plot: "A character with obvious motivations encounters a mysterious force he doesn't understand. Over the course of this story, we come to understand this force and, in doing so, learn something new about the character."

This is like the main character in the novel Flatland. This is the story of a square who exists on a two-dimensional plane who encounters a three-dimensional object, a sphere. This mysterious force doesn't behave like the two-dimensional laws say he should. This is a good metaphor for each of us, living in our own limited worlds, taking a lot of things for granted. Absurdities can grow safely in this environment until an intrusion from another dimension exposes these flaws.

In one way or another, most of my own screen stories fall into this pattern. Someone ordinary meets something extraordinary. The extraordinary force could be something paranormal — like Bigfoot or a pair of X-ray glasses — or it could be an unusual circumstance not normally encountered in real life. This force doesn't have to be realistic or even plausible. In fact, it is manufactured specifically to illustrate something about the ordinary character.

If I am going to build, say, a time machine, I will design it in such a way as to illustrate the flaws of the character. This is a lot like how action movies are created: Plot circumstances are arranged to place the hero in maximum peril but also give him a hidden way out.

Personally, I don't care about physical peril; instead, I want to put the character in existential peril. That's a situation where one of his core assumptions about life is being called into doubt. Examples are when a priest begins to doubt whether God exists or a lawyer stops believing in the law. You are face a special kind of risk when the thing you have built your life and self-esteem on begins to crumble. This is far more interesting than being threatened with guns. Some people can adapt and some people can't, but it is usually an entertaining and illuminating process to watch from the outside.

Stories happen when I discover both a character and an extraordinary circumstance to illustrate his flaws.

Photo #1 source unknown. It may be titled "The Escape."
Posted by Glenn Campbell at 10:47 AM