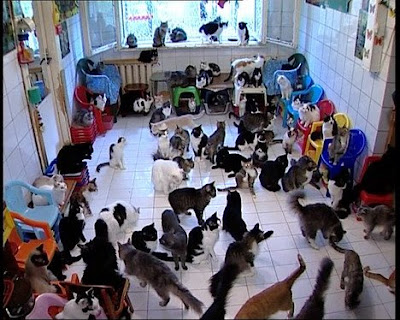 In the sitting room of her home in rural England, a pleasant little old lady is being interviewed in a documentary. She is appealing for financial help from the public for her organization, "Shady Acres." This place is all about love, she says, and about caring for God's creatures who are unable to care for themselves.

As she speaks, a cat walks across the back of the sofa where she is sitting. The woman continues talking in general terms about the value of every living creature as well as about her own organizations desperate need for funds. As she speaks, we pull back to see another cat, and another, until we realize that the whole small room is packed with cats! The cats walk all over the lady until she loses her train of thought.

An off-screen interviewer points out that there more than 500 cats on her fenced-in property, and that the local government has declared the home in violation of a number of codes. Doesn't the woman realize the health danger she is creating and the stress she is putting the cats under?

The woman acknowledges that "Shady Acres" has problems, and that's why she is appealing for funds. She says that she has no options. Since every life is valuable -- even a little kitten's or a kitten still in the womb -- she can't bear to turn any feline away. She admits that she can't afford to feed the cats or spay or neuter them, but this doesn't justify the rejection of any innocent kitty who needs a place to say.

The woman says that she herself has known rejection, and it is a horrible feeling. She talks about the pain of being locked out and left in the cold -- referring to the kitties of course, but she may also be referring to herself.

The interviewer asks: Given the deplorable conditions inside the compound, wouldn't new cats be better left outside to fend for themselves?

No, no, the woman insists, leaving a cat outside would invite almost certain death. There are packs of raging dogs outside who will tear apart any unattended kitty they find. Rejecting a kitty or failing to pick it up when found wandering would be no better than a death sentence for the innocent feline.

In the middle of the interview, the woman stops, alerted to sounds outside. She looks out the window and gasps. She rushes outside the house, and we follow her.

Outside, the local animal control authorities have arrived in force, in an operation resembling a massive drug raid on a methamphetamine lab. Officers wearing hygienic facemasks and heavy gloves are seen netting and caging the animals. The cats take off in all directions! Health Department workers in hazmat suits are preparing to enter the house.

The woman races around the compound, frantically trying to stop the assault. She calls the officers "Nazi stormtroopers" and "kitty killers." Finally, a police officer firmly leads the woman away, removing her from the property for the duration of the operation.

Sometime later, we visit the woman again outside her home. She wanders stunned through her now-empty yard like a soldier visiting a battlefield where many comrades have died. She describes what happened here as a "Holocaust". She insists that all of the kitties are being gassed, and that the animal control officers now have "blood on their hands."

The interviewer repeats the statement of authorities who say they'll try to find homes for as many of the cats as possible. The woman replies that she doesn't believe it. All they have on their mind, she says, is genocide.

Then something alerts the woman. She goes to a porch, looks under it and find a litter of kittens that the officers overlooked. Her face brightens up, and she proudly shows us the kittens as she pulls them out.

She says this is a good sign, like a flower poking its head about the rubble after a volcanic explosions.

"There is always hope," she says, playing with her kittens.