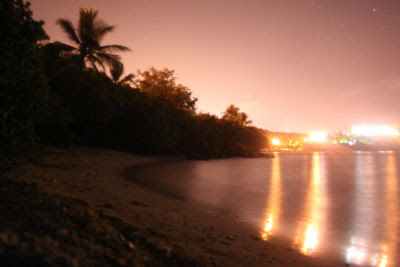 On the first day of my furlough from the airline biz, I figured I’d do the responsible thing and stick around Las Vegas to clean up loose ends. By the end of the day, however, I was aching to travel. I considered Athens, Greece, but it was too expensive. (I calculated that a two-night visit, including airfare and hostel, would set me back $150.) I settled instead on my usual paradise, the U.S. Virgin Islands, which I knew would cost me next to nothing.

This was my third visit to the Virgins. The first two times I slept on a beach on St. John, which is mostly a National Park, but this was dicey, since camping on the beach is illegal. This time, I decided to stay on St. Thomas, where the airport is and the park rangers aren’t. As my plane was landing, I caught a glimpse of a tiny isolated beach on Brewer’s Bay that might serve my needs. After a 3-mile hike from the airport, I was there, arriving just around nightfall.

The beach was a crescent of soft white coral sand no more than 100 yards long. I set up my one-man tent in the sandy plateau just above the surf line, where the waves were no more than six inches high. I travel to this part of the world with a tent but no sleeping bag or mattress. The tent is necessary for protection from insects and rain, but bedding isn’t needed because the temperature is usually perfect -- not too cold, not too hot as long as you sleep nearly naked. The sand under the tent floor provides a mattress of sorts – at least better than rocks or hard ground.

The beach was inaccessible by road, only by trail, so there was little chance of my being discovered or visited at night. I had the place to myself, so I bathed naked in the ocean. I could actually “bathe” because the ocean here is bathwater temperature and perfectly clear. With liquid camping soap, which works in salt water, I could wash up almost as well as in a shower.

I then tried to get some sleep, but it didn’t go as well as I had hoped. First of all, even “soft” sand can be pretty hard, and it can be difficult getting comfortable enough to sleep. Secondly, I had a visitation by a tropical creature.

I first felt it scampering across my legs, then across my bare chest. This can be disconcerting in the darkness when you’re in a tent that you believe is sealed and you don’t know what the creature is. I got my flashlight, shined it upon the intruder and found him to be a huge cockroach, almost two inches long and an inch wide. I am not freaked out by such things, and he was not afraid of me, so I picked him up with a t-shirt and ejected him from my residence.

What was disturbing is that I didn’t know how he got in. My tent appeared to be bug-proof, and it would take a big hole to admit such a beast. I examined all the seams and could find no such hole, so I figured he must have climbed in my pack when I was setting up the tent and moved into the tent when the pack did. 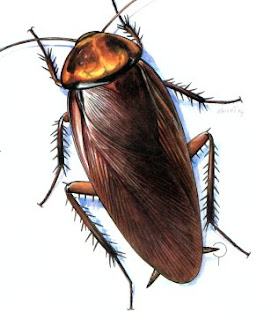 Unfortunately, the scampering resumed about fifteen minutes later. I wasn’t sure whether it was the same cockroach or his identical twin who had also hid in my pack. (I am very poor at cockroach identification.) I again ejected him from the tent but didn’t have the fortitude to squish him when I had the chance. A few minutes later, he returned again! At this point, I realized that it was probably the same roach returning again and again through some unknown orifice. My fortress was not secure! I really wanted to kill him this time, but I was only successful in removing him from the tent again.

Not knowing when he would return, sleep was now impossible. I suppose that if I was a real man I could have peacefully co-habitated with the roach. I know millions of people do in the tropics. The roach wanted only my food, which was everywhere loose in my tent. He would probably eat his fill and then leave, but I couldn’t quite tolerate this. It was 2am, and I knew I wasn’t going to get any more sleep. What was I going to do now?

Most of us are familiar with tropical beaches only from the photographs on calendars. I have visited and photographed some of those beaches and can report that they truly exist as they are pictured: perfect white sand, perfect blue water and often a palm tree hanging out prosaically from the shore. But there are many things the calendars don’t tell you. You can’t sleep directly on the beach, because the bugs and maybe the crabs will eat you alive. You’ll also get soaked by the rain that comes almost every night. The sand itself is a pain, as it gets into everything. So does the humidity. On a tropical island, humidity near 100% is the norm, which means nothing ever dries out. Sand, humidity and computers don’t mix, and I am constantly worried about my electronics.

In the tropics, there is little in the way of dusk or dawn, and you can count on nearly 12 hours of darkness any time of year. In general, the sun drops like a rock at about 6pm and pops above the horizon at about 6am. If you are camping and you sleep for 7 hours, this means you still have 5 hours of darkness to kill.

At 2am, I still had four hours before the dawn, and it was feeling like a four-hour airplane flight. I worked on my computer for about an hour until the battery died, but then what? I bathed naked in the ocean – again! – but it seemed pointless by now. How many hours of a warm bath can you take?

Finally, at about 4am, I felt that I had no choice but to break camp. All this perfection can be grating. The thing they never tell you about Paradise – of any kind – is that THERE’S NOTHING TO DO. Sure, it may be prestigious to sit at the right hand of God, but what are you going to do once you are there? Play chess? I find that I have to relearn this lesson every time I visit a Magic Kingdom: No matter how big the anticipation may be, within a few hours, it’s time to get out!

I took my time pulling down the tent and assembling my pack, but it was still full darkness when I was ready to go. Around dawn I was at the University of the Virgin Islands, about a mile from the beach. I found a covered veranda there where I could plug in my computer. That’s when the torrential rains began, and they pinned my in that location for four hours. Had I not broken camp when I did, the rains would have overcome my simple tent; my computer would have been at risk, and I would have been miserable. Thank you, Mr. Roach!

Twenty-four hours after arriving in the Virgins, I was back on a plane heading back to the real world. There’s only so much of this Paradise shit you can handle. 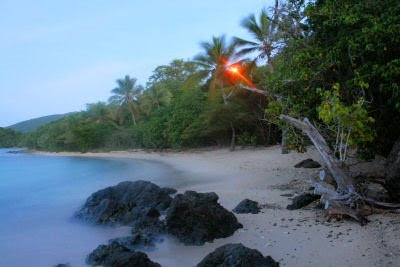