Screen Story #21: "The Dangers of Modeling" 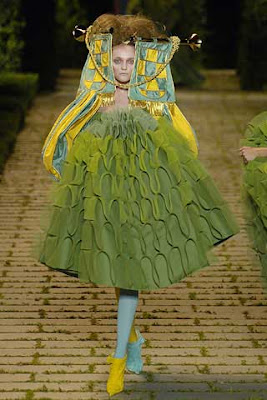 In a mock public health documentary, high school students are warned about the dangers of modeling. The film's message is that modeling is an addiction little different from drug abuse and that its damage to young women is just as severe.

A series of clinical and academic experts explain the potential life-long damage to a young woman's self-esteem, her body and her future career prospects if she follows the modeling path. They point out, using charts and graphs, that for every woman who finds success at modeling, a thousand others are seduced by the field and fail, leaving them broken and penniless. In another alarming graphic, a woman's brain is seen visibly shrinking if she pursues modeling for an extended period of time. This is due both to lack of brain engagement and inadequate caloric intake.

Former models themselves are interviewed, and they talk about how modeling took over their lives. They say they were seduced by the "high" of people appreciating them for their looks, but their need for such approval soon became insatiable. Like drugs, they could never get enough, and their lives soon began to revolve around getting their next fix.

One expert says that due to the permanent damage of anorexia and bizarre diets, some models lose decades from their life expectancy. Others are permanently unable to bear children.

One ex-model refers to the industry as a "cult" and explains how it brainwashed her into thinking that her value was only skin deep. Modeling forced her to perform like a circus animal. "I was willing to jump through virtually any hoop for them," she confesses.

We see stock footage of fashion models in video shoots, dressed in absurd outfits and doing ridiculous things at the direction of cruel and capricious male supervisors, obviously all gay. ("No, no, no, not THAT way!" screams one.) When on the runway, the models are smiling and composed, but off-stage we see them crying and distressed, personally humiliated by what they have been forced to do.

The experts point out that for even the one-in-a-thousand who manages to support herself through modeling, the success is short-lived. The average productive career of a fashion model is only 2.37 years, one expert notes, at which point she has been sucked dry by the industry. She is then discarded on the street, with a shriveled brain and no further career options.

We see a former model working in a fast food restaurant. In an interview in the back of the restaurant, she tearfully describes how she was used and discarded. Her mascara runs down her cheek as she cries.

As the film comes to an end, the experts conclude that modeling is just a stepping stone to even worse forms of debasement: pornography, prostitution… even acting.