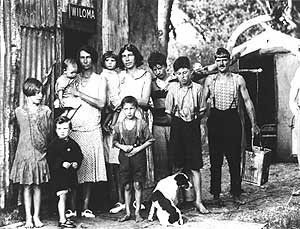 In the rural hills of West Virginia, a hillbilly couple is being interviewed in their home. They are Darnell and Dolly Wilkins. They are surrounded by filth and by a number of unwashed children of various ages. Dolly is pregnant—again.

An off-screen interviewer asks the couple how many children they have. They both reply simultaneously:

Dolly clarifies: "Well, that's twelve that came out of me, not including the one on the way."

Darnell adds that the rest are "iblagitiment."

Then Darnell thinks about it some more and corrects himself. "No, eighteen," he says.

The interviewer tries to ask a sensitive question very carefully. He begins: "It appears that both of you are somewhat intellectually challenged…"

Dolly is indignant! No, she insists, they are not intellectually challenged!

The interviewer continues: "Aren't you worried that your children will be retarded as well?"

Dolly says: "Well, most of them's retarded, for sure, but it's not a problem. The government pays us for 'em. That's nine hundred dollars a month when they're retarded…"

"But only three hundred when they're not," adds Darnell.

She says: "And it's not like we're takin' care of all of 'em at once. There's always some that's run away and some that's in Juvi."

Darnell adds: "When they're in Juvi they don't cost us nothin'."

CUT TO: The county sheriff being interviewed in his office. He calls the Wilkins household a "one-family crime wave."

Sheriff: "I'd say well over half the crime in this county is caused by Wilkins kids or at least has some Wilkins kids involved. It's got to the point where my deputies and I can take one look at a crime scene and know exactly which Wilkins did it."

CUT TO: Documentary footage of two sheriff's deputies investigating the scene of a domestic burglary. The deputies get into a heated argument about which Wilkins is responsible: Dixie Wilkins or Danny Wilkins. Then one deputy points to a stain on the carpet. "Look, urine," he says.

Both deputies look at each other and say simultaneously: "Danny Wilkins."

CUT TO: Sheriff being interviewed in his office.

Sheriff: "It's a revolving door. As soon as we release one Wilkins from custody, it's time to arrest another."

CUT TO: Sheriff's deputies arriving at the Wilkins homestead with one Wilkins boy in custody in the back seat of the squad car. They take that boy out of the car, remove his handcuffs, then place the same handcuffs on another Wilkins boy and put him in the car.

CUT TO: Darnell and Dolly being interviewed.

CUT TO: The kitchen. We see a 14-year-old non-retarded girl, Molly, trying her best to take care of several young children. She is harried, but very attentive. She looks after the kids like they were her own.

CUT TO: Molly in an interview setting at the kitchen table. She is playing with a baby in her lap. The off-screen interviewer asks: "What is it like being the only Wilkins child who isn't retarded, who hasn't run away and who has never been arrested?"

Molly is tongue-tied for a moment and doesn't know what to say. For a moment, we wonder if she might be retarded, too.

Then Molly composes herself and answers thoughtfully. "It's challenging," she says.

The interviewer asks Molly if she has ever considered running away.

Molly: "I've thought about it, but I don't know what the babies would do without me. Mom tries her best, but she doesn't understand what they need."

The interviewer asks Molly if she has any hobbies. Does she have any way to escape from the pressures of the family?

Molly is tongue-tied again. She can't seem to think of anything. Then she shrugs. "I go to the library," she says.

CUT TO: Outside a small community library. Molly is leading us on a tour. Molly instructs us to be very quiet in the library, then we follow her inside.

Inside, she proudly shows us the library like she was showing us her own home. She shows us the children's section, the reference section, the periodicals, the book stacks. She also introduces the staff: the head librarian, the reference lady, the desk clerks. She obviously has a warm relationship with each of them, and she hugs the head librarian.

CUT TO: Head librarian being interviewed in her office.

Librarian: "Molly is a joy. Most kids just come here when they have assignments, but Molly really wants to learn. She comes here almost every day after school, and she's curious about everything. It's got to the point where she's read almost all the books we have, and we have to order more for her from another county."

CUT TO: We continue on Molly's tour of the library. She takes us now to a very special place. It is a hidden nook in the book stacks where she can be totally alone.

CUT TO: Head librarian being interviewed.

Librarian: "I know her circumstances at home are difficult, and I think we play an important role in her life. To me, Molly is who the library is here for. It's what we're all about. We're giving kids like her a chance. If they want to learn, if they want to better themselves, this is a place they can do it. It's free. It's open to everyone. The library isn't just about books. It's a community. It is an entryway into the rest of the world. For kids like Molly, it's a place to escape to, a place of refuge."

While the librarian is still talking, the screen fades to black. After she is finished, a title then fades up in the middle of the screen…