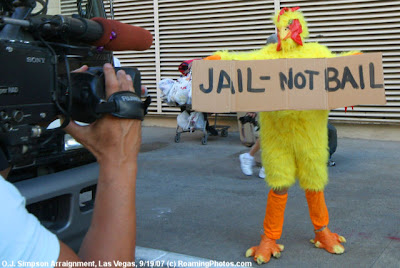 A woman is being interviewed in her living room. We see only her, sitting at one end of a couch. She is awkwardly telling a joke, which goes something like this:

"A man goes to the doctor for his annual check-up. The doctor asks, as doctors are now required to, whether the man is suffering any kind of abuse at home. Any unusual life circumstances? The man replies that, yes, there is something unusual at home: His wife thinks she's a chicken. The doctor replies that the man should bring his wife in for treatment right away. There may be ways that modern psychiatry can help.

The woman being interviewed then laughs self-consciously at her own joke and says, "That pretty much sums up my situation."

We then cut to a view of the whole couch. Sitting at the other end is a man dressed in a chicken suit — the woman's husband.

In a series of documentary scenes and interviews, a full picture emerges. The man first put on the chicken suit when he got a job promoting a fried chicken restaurant, but he never took it off. He now goes everywhere in the chicken suit, even sleeps in it. He calls himself "Chicken Man."

Chicken Man is a political activist. He goes around to public protests and media events and holds up signs to draw attention to worthy causes. He doesn't get paid for this; it's just his calling. (He calls it his "superpower.")

When interviewed in the living room, Chicken Man can talk rationally about his goals. However, when he is out in the field protesting, he talks only in chicken clucks. He also does a chicken dance, intended to draw attention to himself and whatever cause he is advertizing.

Chicken Man's wife, who he calls "Mrs. Chicken," seems embarrassed by her husband's behavior, but in the living room interview she tries to present it in a positive light. How many wives get to see their husbands regularly on television? (Albeit as a chicken.) Another advantage is that since her husband became a chicken, they have both become vegetarians.

The latter is due to the fact that Chicken Man TOTALLY FREAKS OUT whenever they drive past a fried chicken restaurant. He clucks furiously and flaps his wings. He is also upset when they pass any kind of restaurant that serves chicken products: chicken nuggets, chicken strips, etc. He certainly won't tolerate chicken in the house, even chicken broth. He can verbalize this in the living room, explaining that he can't stand to see chickens suffer, but on the road he just does his crazy chicken act whenever they pass, say, a KFC franchise. Much of Chicken Man's work is in support of vegetarian causes, such as protesting at meat packing plants.

Although Mrs. Chicken claims to support her husband, we can see the strain this is placing on their marriage. Chicken Man refuses to work but instead devotes himself full-time to his protests. He also spends a lot of time sitting at home watching himself on TV.

We see Mrs. Chicken come home from work, and Chicken Man is passed out on the couch, surrounded by beer and popcorn, with a news clip of himself repeating over and over on the TV.

Mrs. Chicken then confesses quietly to the camera that he wasn't always like this. When they got married, he was a normal man. We see snapshots of their wedding day, and they seem a happy couple like any other. Then he lost his job at the meat packing plant and had to start looking for work. He got the job being an advertising chicken outside Bayou Bob's Fried Chicken, and everything started sliding from there.

Chicken Man doesn't even drive, because his chicken suit prevents it. Instead, his wife has to chauffeur him to his protest gigs, in a car he has dressed up as a "Chickenmobile." Chicken Man always sits in the back seat like a dignitary, never in the front.

Too much of Mrs. Chicken's life is spent either driving Chicken Man around or waiting for him in the Chickenmobile while he protests. During one of these long waits, Mrs. Chicken reveals her real frustrations. She gets into a private girl-to-girl conversation with the off-screen filmmaker and seems to forget that the camera is rolling. This interview is intercut with distant views of Chicken Man protesting and making a fool of himself.

Mrs. Chicken reveals that she believes her husband has a mental illness, but she doesn't know what it is. She has read all sorts of psychology books and can't find anything about people who think they are chickens, so she doesn't know what to do. When her own doctor asked if she was abused at home, she was too embarrassed to even mention it. She has tried to suggest to Chicken Man that he see a psychiatrist or counselor, but he'll have nothing of it, because he believes there is nothing wrong.

The interviewer asks Mrs. Chicken whether she thinks she might be enabling her husband's disease by continuing to support him when he doesn't work and by driving him to his protests.

Mrs. Chicken thinks about it and agrees she probably is enabling him, but she feels she has no choice. If she doesn't do what he wants, then he does his crazy chicken routine and becomes impossible to live with.

The interviewer then asks why she doesn't leave the man altogether, even get a divorce. The interviewer repeats Mrs. Chicken's own punch line: "I'd like to, Doc, but I need the eggs."

"It seems to me," says the interviewer, "that he isn't even producing any eggs."

Mrs. Chicken says she can't even consider it. When she got married, she promised to stick with her husband through thick and thin for the rest of their lives. Their wedding vows said, "in sickness and in health." Her husband is obviously sick, but that doesn't give her the right to leave him. It's just like if her husband got cancer: She wouldn't leave him then, and she won't leave him now just because the illness is mental and he has turned into a chicken.

The interviewer says: "Well, then you really are trapped."

We can see on Mrs. Chicken's face that the full implications are beginning to dawn on her.

Just then, Chicken Man gets into the back seat of the car. He is very exuberant over what has apparently been a very successful protest.