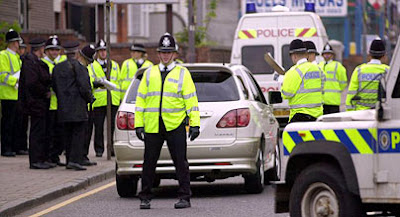 We are inside an enclosed van with no windows that is carrying a motley crew of a half-dozen men in street clothes. Their relaxed banter suggests they are heading to work, and their accents indicate they are from the English working class. A couple of them are drinking coffee -- or are trying to, since the jarring motion of the vehicle is making it difficult.

A VOICE comes over an intercom: "Okay, Gentlemen, radio check."

The VOICE calls out the last name of each of the men in the van -- REILLY, PERCY, WALLACE, ADAMS, WHITTAKER, FRANKLIN -- and each of them responds "here" or something similar. It's very casual. Some of them adjust the hidden earpiece in their ear. It appears now that these are policemen on some kind of undercover mission, but a routine one.

VOICE: "You're going to be the runner today, got it?"

REILLY (pretending to whine): "But, Mother, I did it last time?"

VOICE: "Percy and Wallace, you got the perimeter."

The van stops moving and the men start to get up, although the van doors are still closed. They each pick up some heavy tools: crowbars, sledgehammers, shovels.

The doors in the back of the van burst open and the men rush out. We are in a peaceful London residential neighborhood, and the men start trashing it! WHITTAKER smashes the windshield of a car with a crowbar, and the car alarm goes off. REILLY smashes the window of a house with a shovel. PERCY picks up a sidewalk trash bin and dumps it out on the road. FRANKLIN sprays graffiti on a wall, while ADAMS and WALLACE push over a telephone booth.

Passers-by are stunned, and some of them run away. A woman and her young daughter freeze on the sidewalk, not knowing what to do. PERCY runs up to them in a threatening manner, stops just short of them and says, "Boo!" The young girl starts crying and the woman quickly runs away with her. Now there are just the men in the street, smashing things.

WHITTAKER is continuing to work on the same car, breaking every window with his crowbar.

The VOICE comes over the radio: "Headlamps?"

WHITTAKER looks up the neighborhood security camera on a light pole. "Yessir!" he says, and he smashes the headlamps of the car as well. "How 'bout I take out that camera, too!"

Meanwhile, FRANKLIN is using two different cans of spray paint to make a creative artwork on a shop window. ADAMS comes over and admires the work - then smashes the window.

"Time out," says the VOICE, and the men stop what they are doing. "Okay, good work. Looks like the response is delayed today, so everyone break for five. Smoke if you have them."

The men now mill about in the street. Some of them light up cigarettes. They talk lightly about what they have just done, as though they were park workers who had trimmed some trees.

VOICE: "Okay, got the news overhead. Back to work!"

The men continue their spree of mayhem.

CUT TO: A television news program. The presenter says that a gang of hoodlums have just struck on Paddy Lane. From a helicopter's perspective, we see the men smashing windows and threatening passers-by.

Then, still from the helicopter's perspective, we see the police arrive in force, in a whole armada of vehicles with flashing lights. We see policemen engage the hoodlums in what appears to be violent hand-to-hand combat.

But when we cut back to ground level, we see that the police and hoodlums know each other quite well and are just play-acting for the camera. When a policeman appears to be beating a hoodlum with his baton, he is actually missing by inches, while the hoodlum only pretends to be hit. Both parties are laughing about it and making silly remarks, even though it looks quite serious from the air.

From the helicopter, we see REILLY take off on foot, with several policemen in close pursuit. All of them pass into a covered parking garage where the camera in the helicopter can't see.

Inside the parking garage, we see both REILLY and his pursuers milling about together, catching their breath. "Too many cigarettes," says one, and the others laugh. The policemen urge REILLY to slow down.

The VOICE tells them all to continue the chase, so they do.

From the air, we see the hoodlum and his pursuers emerge from the garage. The hoodlum makes a daring attempt to escape by vaulting some backyard walls, but the police remain close behind. Finally they take him down, and a struggle on the ground ensues. Shadow punches are thrown on both sides until the suspect is subdued, handcuffed and lead away.

The television news report says that that the police have the matter under control and that all suspects have been arrested. From the air, we see the police gather the six suspects together, all handcuffed. They herd them back into the same van they came out of! We see now that it is a police van with the "Special Tactics" unit.

Inside the van, the six men remove their own handcuffs, which just slip off their hands.

They all acknowledge that this was a good day.

CUT TO: A police substation. The policemen and hoodlums are sharing the same locker room. They compare notes on the events of the date and joke about each other's mistakes. Then they each punch the same time clock and say goodnight.

CUT TO: A documentary interview with three of the hoodlums in a garden setting. They talk extemporaneously about their work, sometimes interrupting each other or embellishing what another has said.

They see themselves as performing a vital service for society. Police are necessary to maintain law and order, but police can't be justified in a neighborhood unless there is enough crime there. Their job is to "even out" the crime statistics so that each neighborhood is equally protected. Their logic doesn't make much sense to us but seems perfectly rational to them.

They point out proudly that no one ever gets hurt on their raids, only property damage, which is reimbursed out of the general fund. Yes, some people will be frightened, but this is necessary, because only frightened people are appropriately vigilant against crime.

Besides, the job pays well. One hoodlum confesses almost tearfully that the job helped him turn a corner in his own life. He used to be a drug addict who turned to real crime to support his habit. Now that he works for the other side, he receives a regular paycheck and is off the drugs. "The important thing is, I got my self-esteem back," he says.

All of them say they feel fortunate to have found a job that suits their personalities.

"It's a win-win situation," says one.