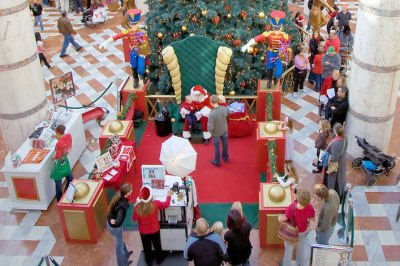 In a suburban shopping mall, a department store SANTA is just doing his job. A tacky Holiday Village has been set up near the food court, and SANTA is sitting on a throne in the center, taking children on his knee for photos and listening to their Christmas wishes. He is a very convincing Santa, with a round and jolly face, and his beard is real. Photos with SANTA are $20 each, and it appears that you need to buy one to get any quality time with him. A couple of phony ELVES are taking the photos and collecting the money.

SANTA goes “Ho, Ho, Ho!” and asks each child what he or she wants. A series of selfish children take SANTA’s lap and tell him their commercial product needs. Some of them bring Christmas lists, which SANTA slips into his pocket and promises to read later. Each kid is accompanied by one or two parents, who dutifully pay the $20 and gush about how cute their kid looks.

It is getting late in the day, and SANTA is dragging. The main crowd has cleared out, and only one child is left in line. SANTA looks down and sees that it is a LITTLE GIRL, no more than 7 years old, in slightly ragged winter clothes. Her appearance is startling, especially because there are no parents with her. SANTA exchanges glances with his ELVES.

“Hello little girl,” he says in his best theatrical voice. “Have you come to see Santa?”

The little girl nods, a bit intimidated by the great man.

“Then come up here and sit on my lap,” says SANTA. He then starts into his usual warm-up routine, trying to get the girl to smile for the camera. She won’t smile, however, and the PHOTOGRAPHER ELF shakes his head and doesn’t take a picture. SANTA seems a little uncomfortable, but he remains in character.

“And what do you want for Christmas, little girl?” he booms.

“I want my mom to get better,” says the LITTLE GIRL.

A distressed look comes over SANTA’s face. “Oh, is she sick?” he asks.

The GIRL replies that her mom is so sick that she can’t get out of bed.

“I don’t know who my dad is,” says the LITTLE GIRL.

“Is there anyone else living with you?” asks SANTA.

“No, just me and my mom,” says the LITTLE GIRL.

SANTA is looking more and more uncomfortable, while the PHOTOGRAPHER ELF, who doesn’t hear the conversation, is trying to get the girl to smile by making faces at her.

“Do you know what’s wrong with your mom?” asks SANTA.

“She has AIDS,” says the LITTLE GIRL.

Just then, the flash goes off, and the scene is frozen in time. In the photo, the girl is smiling, but the expression on SANTA’s face is one of shock and distress.

The ELVES are eager to leave, and they motion the LITTLE GIRL off SANTA’s lap.

“I wrote you a letter about it,” says the LITTLE GIRL. She hands it to SANTA, and he weakly thanks her. He sticks the letter in his pocket with the Christmas lists.

The LITTLE GIRL goes to the CASHIER ELF. She pulls out a purse and proceeds to pay for the photo – in very small denominations. There are pennies, nickels, dimes and a lot of rolled up dollar bills, and it takes a while for the CASHIER ELF to count the money. SANTA looks very pained. After an awkward period of counting, the LITTLE GIRL receives her photo with SANTA.

She looks back at SANTA, smiles warmly and waves. SANTA puts on his best smile, and waves back. The LITTLE GIRL then disappears into the crowds in the mall.

CUT TO: Santa’ makeshift dressing room in the back of the mall.

In front of a mirror, SANTA removes his red hat to reveal his balding hairline. Then he takes off his red jacket, and starts to remove his rosy-red make-up.

While looking at himself in the mirror, he thinks of something. He then reaches into the pocket of his jacket and pulls out a pile of Christmas lists. He looks through them to find the LITTLE GIRL’s letter. He then starts reading it.

As he reads the letter silently to himself, we see great sadness come over him. Eventually, there are tears streaming down his face and into his white beard.

SANTA looks up at the mirror and sees the LITTLE GIRL standing in the doorway behind him. He spins around to face her.

“Well, Hello!” he says, not trying to play Santa this time.

“Did you read my letter?” says the girl.

“Can you make my mom better? You don’t have to get me anything else.”

Poor SANTA is in distress. He is done with playing a role and needs to come clean. Patiently, he explains to the girl that he isn’t really Santa. He’s just a lonely old man who plays Santa to make money.

“I wish I could help your mom, but I just don’t have the power,” he confesses.

He then takes a $20 bill out of his wallet and gives it to the LITTLE GIRL. He says that she shouldn’t have to pay for her picture.

The LITTLE GIRL takes the money and thinks about things for a minute. Meanwhile, the tears come back to SANTA’s eyes.

“Well, can you pretend to be Santa?” says the LITTLE GIRL. “I think it would make my mom happy.”

SANTA wipes the tears from his face. “Where do you live?” he asks.

“Well, I can certainly give you a ride back. What’s your name?”

“My name is Dave.” He reaches out his beefy hand to shake hers. “I’m very pleased to meet you. What is your mom’s name?”

They both leave the room, and we…