Screen Story #14: "The Man on the Television" 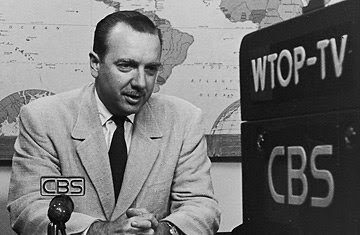 We are in the living room of an urban apartment sometime in the late 1950s or early 1960s. A black-and-white television is playing as a WOMAN dresses for work in another room. THE MAN ON THE TELEVISION is reading the news.

From the other room, the WOMAN asks aloud whether she should wear the green dress or the blue dress.

The WOMAN is unfazed by this. She comes into the living room and speaks directly to the television, saying that she was thinking of the green dress, but now that he mentions it, the blue is probably better.

The WOMAN and THE MAN ON THE TELEVISION are speaking to each other like they are husband and wife, or at least lovers.

THE MAN ON THE TELEVISION says that the weather doesn't look good. He points to a weather map to indicate that showers are likely. "I really don't want you going out there in that," he says.

The woman says she will bring her umbrella.

THE MAN ON THE TELEVISION then starts reading some horrifying crime statistics and points out that the streets aren't safe anymore. There's also a dangerous strain of flu going around. People have died from it.

It becomes clear that THE MAN ON THE TELEVISION is trying his best to convince the woman not to go, and his arguments are becoming more and more desperate.

The WOMAN doesn't reply. She comes back into the living room in the blue dress. "How do I look?"

"You look good, really good." says THE MAN ON THE TELEVISION, "but I still don't want you to go."

She starts to leave.

"Karen, don't go!" says THE MAN ON THE TELEVISION shouts, almost in a panic.

She opens the door of the apartment and begins to step out.

Suddenly, she realizes there is nothing outside the door - just an empty abyss! It's like her whole apartment has been ripped out of its place on earth and is now suspended in space.

She begins to fall into the void, but she catches herself on the door frame. Frantically, she pulls herself back inside. She struggles back into the apartment and closes the door. She is hyperventilating and stunned. She collapses on the couch. 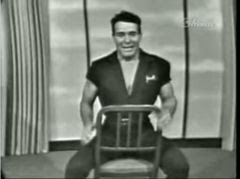 "I told you not to go," the MAN says. "It's a jungle out there. Why don't you just stay with me today? We'll exercise, and then it's time for 'General Hospital,' sponsored by Tide. You like that show don't you?"

THE MAN ON THE TELEVISION displays some absurd stretching move, and we…