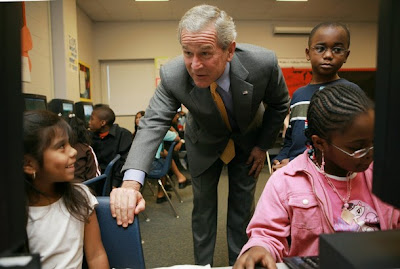 Outside the Friendswood Elementary School, somewhere in America, is parked an armada of TV news trucks and vans. Clearly, some sort of big media event is going on inside.

Cut to a first grade classroom. A CONSERVATIVE POLITICIAN is sitting on a chair in the middle of the room, reading a story to the children who are sitting on the floor all around him. Along the edges of the classroom are news reporters, photographers, cameramen and sound technicians. Obviously, this is a contrived photo op where the tough-talking POLITICIAN is trying to show his gentler side.

We hear only the last few lines of the story he is reading. It is a conservative fairy tale based on Little Red Riding Hood. In exaggerated and theatrical speech intended for children, the POLITICIAN reads:

But thanks to his right to keep and bear arms, the Woodsman had a revolver strapped to his hip. He shot the Big Bad Wolf, then with his trusty ax he cut open the wolf’s belly and out popped both Grandma and Little Red Riding Hood. “Oh thank you, Mr. Woodsman!” said Red Riding Hood, “How can we ever repay you?”

Standing discreetly behind the POLITICIAN is his MEDIA HANDLER, who is cringing at all this. He bends over and whispers something in the POLITICIAN’s ear.

The POLITICIAN closes the book. “So that’s the end of the story,” he says. “Do any of you children have any questions?”

Several children raise their hands, and an impromptu news conference follows, with the children asking the questions instead of the reporters.

One little boy asks, “Why did the woodsman have to kill the wolf?”

The POLITICIAN smoothly responds with his official campaign position about getting tough on crime. Although speaking in simplified terms for the young audience, he is obviously playing to the television cameras. “Bad people have to live with the consequences of their actions,” he says.

But the children ask harder and harder questions, and the POLITICIAN quickly loses control of the situation. One child asks: “Why did you cut our school lunch program?” This begins an exchange between the POLITICIAN and the children that gets worse and worse for him. The answers he gives might be appropriate for adults, but they are clearly wrong for children. The children completely disarm the POLITICIAN with the simplicity of their questions, and he sticks his foot in his mouth at every opportunity. He can’t stop the news conference, however, because the cameras are rolling and the kids are asking good questions.

One of the kids reveals that he is being raised by a single mother who doesn’t have enough money for food and clothes. It turns out his father is currently in prison thanks to a previous tough-on-crime measure. Another kid says his parents are drug addicts, but they can’t find treatment, so he is living with his grandmother. A third child, sitting in a tiny wheelchair, says he needs an operation but he can’t have it because his family doesn’t have health insurance. The POLITICIAN responds with the standard conservative line about self-responsibility, even implying that these first graders are responsible for their own upbringing.

The MEDIA HANDLER is horrified and tries to guide the POLITICIAN by whispering advice in his ear, but it does no good. The POLITICIAN obviously has no rapport with children, and everything he says just gets him in bigger and bigger trouble.

At one point, he tells a little girl that if her parents couldn’t support her, they should have put her up for adoption.

The girl starts crying, and soon all the children are crying. The POLITICIAN is completely lost and helpless in dealing with this crisis.

The MEDIA HANDLER has no choice but to step in and end the event. He says that the POLITICIAN has pressing engagements elsewhere.

The POLITICIAN tries his best to wrap things up. He thanks the school district for inviting him here, and most of all he thanks the children’s teacher, Mrs. Johnson. He praises her good work in raising such bright and inquisitive children.

We see Ms. Johnson for the first time, standing on one side of the classroom. She has a devilish smirk on her face. Suddenly, it becomes clear that the POLITICIAN has fallen into a trap set by Mrs. Johnson. Even as he praises the teacher, it dawns on him that he’s been had.

“I need to go to the bathroom,” says one kid, interrupting the POLITICIAN.

Losing his composure, the POLITICIAN snaps back, “No on my time, kid!”

The MEDIA HANDLER buries his head in his hands.