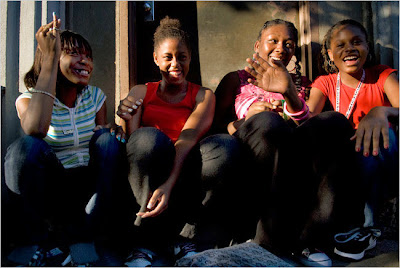 An article in yesterday's New York Times discusses the propensity of teenage girls to talk, talk, talk, and that it may not be entirely good for them.

Girl Talk Has Its Limits

But recently female friendship and girl talk, particularly among adolescents, has drawn growing interest from psychologists and researchers examining the question of how much talking is too much talking. Some studies have found that excessive talking about problems can contribute to emotional difficulties, including anxiety and depression.

The term researchers use is “co-rumination” to describe frequently or obsessively discussing the same problem. The behavior is typical among teens — Why didn’t he call? Should I break up with him? And, psychologists say, it has intensified significantly with e-mail, text messaging, instant messaging and Facebook. And in certain cases it can spin into a potentially contagious and unhealthy emotional angst, experts say.

The research distinguishes between sharing or “self-disclosure,” which is associated with positive friendships and positive feelings, and dwelling on problems, concerns and frustrations. Dwelling and rehashing issues can keep girls, who are more prone to depression and anxiety than boys, stuck in negative thinking patterns, psychologists say. But they also say it is a mixed picture: friends who co-ruminate tend to be close, and those intimate relationships can build self-esteem.

For boys, such intense emotional conversations, which tend to occur less often, did not contribute to heightened anxiety or depressive moods, according to research by Amanda J. Rose, an assistant professor of psychological sciences at the University of Missouri, Columbia.

“When girls are talking about these problems, it probably feels good to get that level of support and validation,” said Dr. Rose, whose latest study on co-rumination was published in the journal Developmental Psychology last year. “But they are not putting two and two together, that actually this excessive talking can make them feel worse.”

As a male, habitually addicted to "doing," I often find the female propensity for talk to be annoying. Yes, there is merit in discussing a problem before acting, but in many cases the discussion seems to go on forever, with no action taking place. Being able to "share" with friends may only give the female the illusion of action when none has taken place.

“It’s a fine line,” said Joanne Davila, associate professor of psychology at the State University at Stony Brook, whose paper on co-rumination is being published by the Journal of Adolescence. “We want to encourage young girls to have friends and to use their friends for support, but we may want to help them learn how to use more active techniques. So if there is a problem, how do you solve it?”...

“There are quite a few adolescent girls who have high levels of obsessive thinking to begin with,” Dr. Sitnick said. “They often do this with their mothers as well. It certainly does seem to be a female behavior, and grown women do it, too, ruminating about certain issues and experiences. It can become a mutual complaint society.”